This story occurred on an American Airlines flight 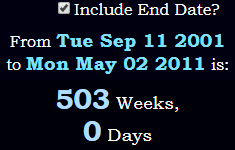 Osama bin Laden was 53 days after his birthday

He was kicked off an airplane on Sunday, which made news on Tuesday, February 27th.

That date is written as 2/27 in the United States.

3.14 are the first three digits of pi, used to create a circle

The 50th prime number is 229. That’s the exact number of months separating the birthdays of Osama bin Laden and Robert O’Neill.

Measuring from his date of birth in 1976 to the story:

There’s a lot of 41 in this story too. Rob O’Neill is currently 41 and was born on the date written 4/10. This is getting heavier coverage today, February 28th, which is 41 days before his birthday.

And February 28th is 325 days after his birthday