The city of Las Vegas, which had just endured the worst mass shooting in U.S. history, got a new National Hockey League franchise in 2017. This happened to be the 101st year of operation for the NFL.

Their inaugural home game was played on October 10th

The Vegas Golden Knights are coached by GerardGallant, whose birthday is September 2nd. The date is written as 9/2 in the U.S. and internationally as 2/9

Their first home game fell on a date with 57 numerology

The Vegas shooting was a Yom Kippur ritual.

This was reflected in Gallant’s age on the date of their inaugural game: 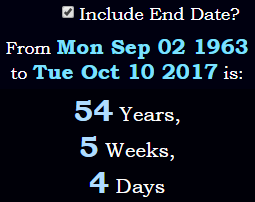 38 is another number heavily-coded into sacrifice rituals

Another number you can’t ignore is 134

Coach Gallant is from:

The Golden Knights’ first ever goal was scored by James Neal during their opening road game on 06-Oct-2017. He was 33 days after his 30th birthday.