Nashville mayor Megan Barry was in the news today for having an affair with a member of her security detail.

33 is the big-time hoax code. The name of her secret companion was Robert, a member of the police.

Her birth name was Megan Christine Mueller. With M.M. initials, (a sideways 33), she seems to have been born into the ruling class.

This story is about an affair with a member of her security detail. Not every affair story is a hoax, but it’s a fitting one to slip in there:

She cheated on her husband Bruce:

With Super Bowl 52 coming up this weekend, it appears as if there are a myriad of tributes, in addition to all the sacrifices we’ve seen. This ties in as well. Allow me to explain:

The Philadelphia Eagles are in the Super Bowl. Philadelphia is where the original U.S. flag was first sewn at 239 Arch Street. 239 is the 52nd prime number. It was 23/9 when Trump first attacked the NFL for its players failing to stand during the national anthem.

Just yesterday, we got news of an injured Minnesota congressman. His birthday was on 23/9, and it was 239 days before the Jesuit Order’s birthday. See post

Flag Day is celebrated on 14/6. This is also Trump’s birthday.

Last week, we got the death of Marcos Carvajal.

Today, we had a Google Doodle for Carter G. Woodson.

Now today, news about Megan Barry, whose full name is:

It’s 7 months, 22 days before her next birthday. 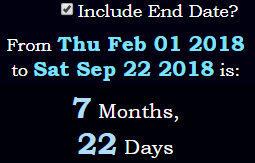 See why 227 and its reflection, 722, are integral to the mathematics of the circle, which is the mark of the Beast.

Like any news story that covers a “character sacrifice” of a public figure, there’s a tribute to the sacrifice of Jesus:

Not including the end date, Barry is 233 days from her birthday. Today is 23 weeks, 3 days after the Great American total solar eclipse. These 233 and 227 numbers popped up in today’s school shooting as well.