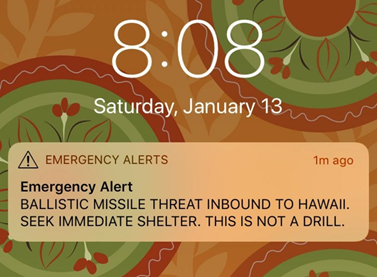 On January 13th, a false alarm caused many residents of Hawaii to briefly panic upon learning a potentially nuclear missile could be headed their way. Ultimately, it was the result of a “wrong button”. But before looking at that phrase’s relevant gematria, let’s take a look at early clues this was a false alarm.

We know by now how fond of the circle the tyrannical Zionist Jews are:

“BALLISTIC MISSILE THREAT INBOUND TO HAWAII. SEEK IMMEDIATE SHELTER. THIS IS NOT A DRILL” = 360 (Jewish Reduced)  |  360 degrees in a circle.

It appears as if most people got it at 8:08. 88 is the number that represents time: Link

They say someone hit the “wrong button” to cause the false alarm.

It was 5 weeks, 2 days after Pearl Harbor Day.

On a date with 52 numerology.

The week before, a man named Shane Missler, which is a lot like missile, won a $451 million MegaMillions jackpot.

The Beast is Time: