There’s a woman who has called in to the Gematria Effect on several occasions. She’s claimed that YouTuber Montagraph, who appears to be the head of a network of shills on YouTube, has harassed her both at work and at home.

I always believed this woman, although I didn’t understand why she, of all Zach’s subscribers, would be targeted for this kind of thing. Well as it turns out, she had a brother who used to play for the NFL – and later died by the numbers.

I have no question now that they were attempting to intimidate this woman because they knew she had stumbled into knowledge that could ultimately clue her in to the fact that her brother may have been killed.

People do die by the numbers naturally in real life, but one must wonder why this woman would be harassed if that was the case with her brother. Something smells fishy.

The first thing that stands out about her brother’s date of death, 27-Sep-2011, is that it was the Jesuit Order’s 471st birthday.

His full name was Joseph Salvatore Tofflemire, meaning his initials are J.S.T. – the three consonants in the word JESUIT.

Let’s look at his full name gematria in the base four ciphers:

Died 82 days after his birthday

Died 9 months, 11 days before his next birthday 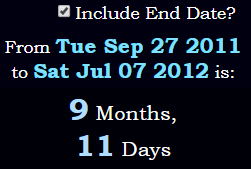 The Jesuits are the masonic order within the Catholic Church.