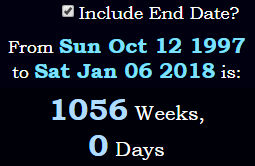 In the first Wild Card playoff game today, Marcus Mariota finally got the Titans into the end zone in the second half. He did so in the most bizarre manner – by catching his own pass and diving into the end zone for the score.

While I’ve seen plenty of QB’s catch their own pass (I watched Favre play for 16 years), I’ve never seen that QB score a touchdown off the catch. This has happened before though…once, quarterback Brad Johnson, playing for the Minnesota Vikings at the time, did it in Week 7 of 1997 against the Carolina Panthers. Remember, the Vikings host the Super Bowl this year.

Strange that Jerry Van Dyke from the show “Coach”, a show whose finale aired in 1997, just died the day before the game. That show took place in Minnesota. See my post on the death of Jerry Van Dyke.

I really kind of hate to make everything seem like an eclipse ritual…but good grief! This is entirely self-evident. Measuring the amount of time between Johnson’s and Mariota’s respective touchdown receptions:

Brad Johnson was 29 years, 29 days old when he threw himself a TD.

“ליקוי חמה” (Solar eclipse) = 29 (Hebrew Reduction)
Mariota’s pass came 29 days before Super Bowl 52, which is being played in Minnesota, where Brad Johnson was playing a home game when he recorded his feat.

“Total eclipse” = 137 (English Ordinal)
The touchdown was scored 137 days before the next total solar eclipse.

Brad Johnson was born on the date written 13/9. Mariota’s touchdown was a span of 139 days after the eclipse.

It came a span of 69 days after his birthday.

156 is really one of the most important numbers to have eyes for. The 156th prime number is 911. Shane McMahon randomly congratulated Rory McIlroy for blowing the Masters when he was 15060 days old. Stevan Ridley just recently came back to play one game at 10560 days old, in a game that finished 34-6. He was 346 months old. “Riddle”…”Ridley”….