This is going to be a pretty long post, but it might be the most important one I make.

I began to take numerology and gematria very seriously in October of 2016, initially propelled by how the 2016 World Series played out. I had picked up on what I believed to be clues hinting at a Cubs win in Extra Innings in Game 7, and I felt strongly enough that I told people at work who had expressed a little interest in what I was doing.

Game 7 took place the night of November 2nd, 2016, and ended the morning of November 3rd. Not only was my prediction correct, but I also guessed who would score the winning run, which was Kyle Schwarber. Although he was the 1st run to score in the 10th inning, it was not technically the WINNING run since the Indians scored in the bottom of the inning. Still, I had caught on to whatever was going on.

The following morning at work, some of my co-workers who had remembered my prediction began picking my brain, since it obviously spooked them out how accurate it was. I didn’t tell them a whole lot, but I did mention that a pairing of 13 & 33 are the main numbers to look for when it comes to clues. When you see those, you know there’s a clue hidden for some sort of riddle.

After these conversations, I sat back down at my desk and realized I had turned the corner with this research and was close to uncovering the truth. But the way the game had played out…I didn’t understand it. Even though I made the prediction, it didn’t occur in the manner I thought it would. Either some amazing technology was being used to control the baseball, or there were “Angels in the Outfield” helping this game along.

Without any ability to comprehend what it was I had truly seen, I calmly began to pray for a sign. Following a very intense spiritual experience at the age of 16, I was always a believer in God, but I had done a poor job keeping in touch as my 20’s progressed. So without anywhere else to turn, I looked above.

Quick backstory: In April of 2016, I split up with my ex-girlfriend, whose house I was living at, and moved in with my brother, his wife, and his son until I found a house to purchase. Things didn’t go so great in 2016, so I wound up staying there for a little over one year.

On the night of November 3rd, I had to let my nephew in the house after work since he forgot his key. Usually someone is home by then, but my brother and his wife were both gone well into the night. My nephew had mentioned that something happened that day, which is why they were gone, but I didn’t really give it much thought. Around 8 pm, I really started to wonder where they were, so I decided to check the local news to see if anything stood out.

In scanning the news, I saw that there was a workplace fatality at the factory my dad works at. Alarmed, I gave my mom a call (my dad works second shift) to see if my he knew the 49-year-old guy who died.

Update: Man killed in industrial accident in Cudahy was struck in head by piece of metal

Not only did he know him – it turned out to be my sister-in-law’s father, who was a co-worker of my dad’s.

I was a little shaken after I hung up, and then I remembered I had asked for a sign in prayer earlier that day. This was too much of a coincidence for me to ignore. My stomach dropped when I re-read the news article and saw that “police were called at 1:15 pm”, meaning if the accident didn’t occur exactly at 13:13 military time, it was damn close. Mind you, the date was 11/3, the factors of 33.

All sorts of things began to cross my mind. Just how powerful are these numbers? Did I help cause this somehow? Was this man murdered by the numbers?

My dad works at this building, although generally in a different area, so I was able to get the full scoop on what happened. Shawn, my sister-in-law’s dad, operated an industrial hammer, one of, if not THE most powerful, in the world. He had recently received a head injury after a large steel ring placed between the hammer used to chock stuck pieces of metal off had broken, and a piece flew into his forehead. Management, however, still demanded the steel rings be used. Apparently, Shawn had said something to the effect of “It’s going to take someone to die here before you guys finally take this seriously”.

This time, the steel rings were colder than normal, as they were hung up next to the exterior wall. This may be partially what caused this next steel ring to completely snap on November 3rd, sending a much larger piece at Shawn. He was struck and killed instantly this time, sending him flipping into another worker, who was also injured and hospitalized.

Shawn was a very well-loved man among his workplace, his friends and family, and his church. He was a follower of the teachings of Jesus Christ. His funeral drew hundreds and hundreds of people; there was literally not enough room in the building. My estimate would be 600-700 people.

At the time, the fact that the accident occurred right around 13:13 was enough for me to know this was the sign I had asked for. I can’t explain the feeling I had at the funeral service. Something was burning inside me, telling me I couldn’t allow this event to go to waste. I knew I had to honor Shawn’s passing by working to wake the world up to the type of thing I had just experienced.

I had discovered Zachary K Hubbard’s YouTube channel in late 2015, and while it had been mentioned at times, the “organic matrix” was not necessarily a notable part of his study. I reached out to Zach on Facebook to share my story, in hopes it would clue him towards the truth of this study a little bit more. It was later that week I ran the gematria on every word in the Bible and called into the Gematria Effect to share my new tool. A couple months later, gematrinator.com was launched, and the rest is history.

In November 2016, I was so focused on gematria, I didn’t really try too hard to find Shawn’s date of birth. All I knew is that he was 49, which meant he was probably born in ’67. This was prior to the discovery of Reverse Gematria, so all that really stuck out is that “Shawn Day” = 41 (Single Reduction), the 13th prime number. I had also measured to the Super Bowl and found it was 94 days before it, the reflection of 49. It was also a span of 95 days, and “Shawn Day” = 95 (English Ordinal). I found it odd but not too wild, since I wasn’t about to fool myself into thinking his death was related to the Super Bowl. That being said, I now understand everything is connected, and this world is not what we thought it was…

In 2017, I wound up buying a house, completely by the numbers. I’ll be doing a post on that before too long. I moved in on my 32nd birthday, and “House” = 32 (Single Reduction), but there’s a ton more to it. What matters in relation to this post is that I lived at my brother and sister-in-law’s for exactly 13 months, 13 days, by circumstances out of my control. I get weirded out just typing that.

This brings us to New Year’s Eve 2018. My brother whose house I had just moved out from hosted a party, and it was that night Kayla showed us the little memorial she has set up for her father, complete with a beautiful set of photos from her wedding day, which was a span of 49 days before he passed away. The idea that he even got to walk his daughter down the aisle by the numbers is just amazing. Next to these photos was a tiny urn, filled with some of Shawn’s ashes, and on that urn was his date of birth.

Before I actually looked at and processed the date in my mind, something swept over me. I just knew there would be a clear 33 reference, in light of the fact that he died around 13:13. His birthday was November 28th, ‘66.

It was one of the most beautiful moments of my life. I got the clear message from God in November of 2016, but it took over a full year for that message to be received in its entirety. I wonder if knowing his birthday last year would have been a bit too overwhelming for me at the time, and maybe God knew that.

But what’s really wild about this New Year’s Eve? The night before, I went to my parents’ house to watch the Orange Bowl with the Wisconsin Badgers with my dad. For some reason, he decided to show me the picture he took from the day of the accident from November 2016, over a year later. The photo showed a Cudahy Police squad car, which had driven inside the factory, behind Shawn’s body, which had a yellow tarp over it.

It was as if God was acting through my father, prepping me for the moment I would have the following night. Even though I already knew this entire thing was obviously very real, now I suddenly had a photo to just drive it into my mind a little more. I’ve been asking for more signs recently, and I have no doubt this had almost everything to do with that. 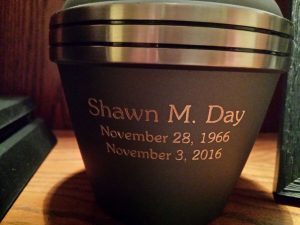 Let’s take a moment to go over this great man’s name gematria. But first, remember he died 49 days after his daughter’s wedding and 94 days before the Super Bowl. Interesting that he also died 25 days before his birthday, in light of the fact that “Revelation” = 49 (Full Reduction) and “הִתגַלוּת (Revelation)” = 25 (Hebrew Reduction). His passing was the revelation I needed to fully accept God back into my life.

Revelation talks about 666 as the number of the beast, the 36th triangular number.

I truly hope and pray that all who read this can collectively make Shawn’s passing a positive thing for humanity, something to help spread the knowledge we need to enough people in order to escape this infinite system of “quiet” slavery.