The number 19 is considered sacred in the Quran, the holy book of Islam. This page is one of many that explains its significance to the religion. There were 19 hijackers on September 11th.

The Taliban took over on a date with Reduced numerology of 19:

The number 19 flipped upside-down is 61, connecting to the most famous terrorist in recent history.

The Taliban has matching 61 gematria with Afghanistan’s President, Ashraf Ghani, who was born on the 19th day of the month and was elected for a second time in ‘19.

The new leader of Afghanistan was born in ‘61, and became the Taliban’s leader on a date with 19 numerology:

The Sun, which begins with the 19th letter, is the 19th card of the Tarot’s Major Arcana:

The number Nineteen has Jewish gematria of 244, the value of Kill in Hebrew.

The Taliban’s offensive began on the 10th anniversary of Osama bin Laden’s death. May 1st is the date that leaves 244 days in the year:

The eclipse code is particularly revered by the Scottish Rite.

His exile occurred on the 227th day of the year:

Ashraf Ghani is currently 72 years old. The 72nd Prime number is 359, and he spent exactly 359 weeks in office:

The masonic connections between the United States and Afghanistan are strong. Consider how the Capital in Kabul was formed in 1776, the same year as the Declaration of Independence (and formation of the Illuminati).

Recall how the biggest Al-Qaeda terrorist attack occurred on 9/11, in a Tisha B’Av ritual.

Notice how the airplane shown trying to leave Kabul shows 1109, like how Tisha B’Av falls on the 9th day of the 11th month (Av). 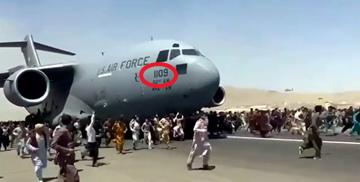 Omitting the and, we get a Reverse value of 632 for the Scottish Rite.