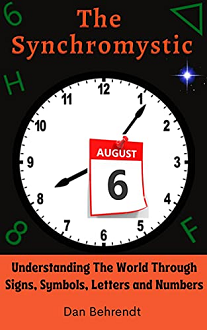 This week, Dan Behrendt of The Mindless Freaks blog released his book, which can be bought off of Amazon. At just $3, this book is a steal to anyone interested in mysticism and/or numerology.

Dan was a driving force in encouraging me to find meaning in my own numerology, and his book provides insight into how gematria is connected to Synchronicity. Consider how the band The Police began recording their album Synchronicity in the year 1982, just one month after Dan Behrendt was born.

Since Dan started teaching his perspective on this code, I’ve come along and tried supporting him with examples of how a lot of numerology may actually be part of the organic matrix. My name Derek Tikkuri matches both Gematria and Synchronicity. On the day I was born, the Sun reached 74° of the ecliptic. My dad was born on the 74th day of the year.

The name of his book is The Synchromystic.

I haven’t begun reading it yet, but I read through the synopsis last night and saw his blog about a synchronicity he had on the day he published it. Just a few minutes after doing so, a massive squall line of storms passed over my house, producing the wildest Wind storm I’ve ever experienced.

The storm occurred on the one-year anniversary of the 2020 Derecho – the word derecho reminds me of my name Derek. That storm leveled a good portion of Iowa‘s crops. Dan Behrendt lives in Iowa. Tomorrow, Major League Baseball plays its first-ever game in the state of Iowa.

The storm produced a massive amount of damage throughout the area, and nearly 15 hours later I still have no power. In the 4+ years I’ve lived at my house, I’ve never had an outage longer than a couple of hours, which last occurred in October of 2017.

That last power outage I had occurred at a very strange time. I had just finished rendering my 50-minute video decoding the Las Vegas shooting, and was in the process of dragging the MP4 file into YouTube when the electricity went out. The timing spooked me out and it even led me to question if I was being surveilled.

Although the timing yesterday was not quite so suspicious, it still strikes me as odd that I essentially called for a war on the mainstream media in my live stream from earlier that day. I’m not suggesting that my rant had anything to do with the storm – but whether the fact they happened on the same day feels like it’s a bit more than a coincidence. Notice I turned a nice round 1888 weeks old yesterday:

This means it was also the first day of my 1889th week, which is connected to 1331, my favorite number.